Hannah is the chatbot solution designed to help employees find HR content faster and reduce the amount of calls and emails to HR support representatives.

I worked with a small team consisting of HR support specialists and subject matter experts. I was responsible for the research, visual and interaction design of the chatbot.

Target users for this venture were employees and managers at The Hanover. To better understand the users and their experiences using the intranet, I sat down with several managers and employees to get a sense of their daily intranet use.

We explored common behavioral patterns like navigation, learning preferences and user experience; but also expanded our scope to include sporadic patterns like time constraints.

Personas developed to get a better understanding of the employee’s background, pain points, motivations and goals. 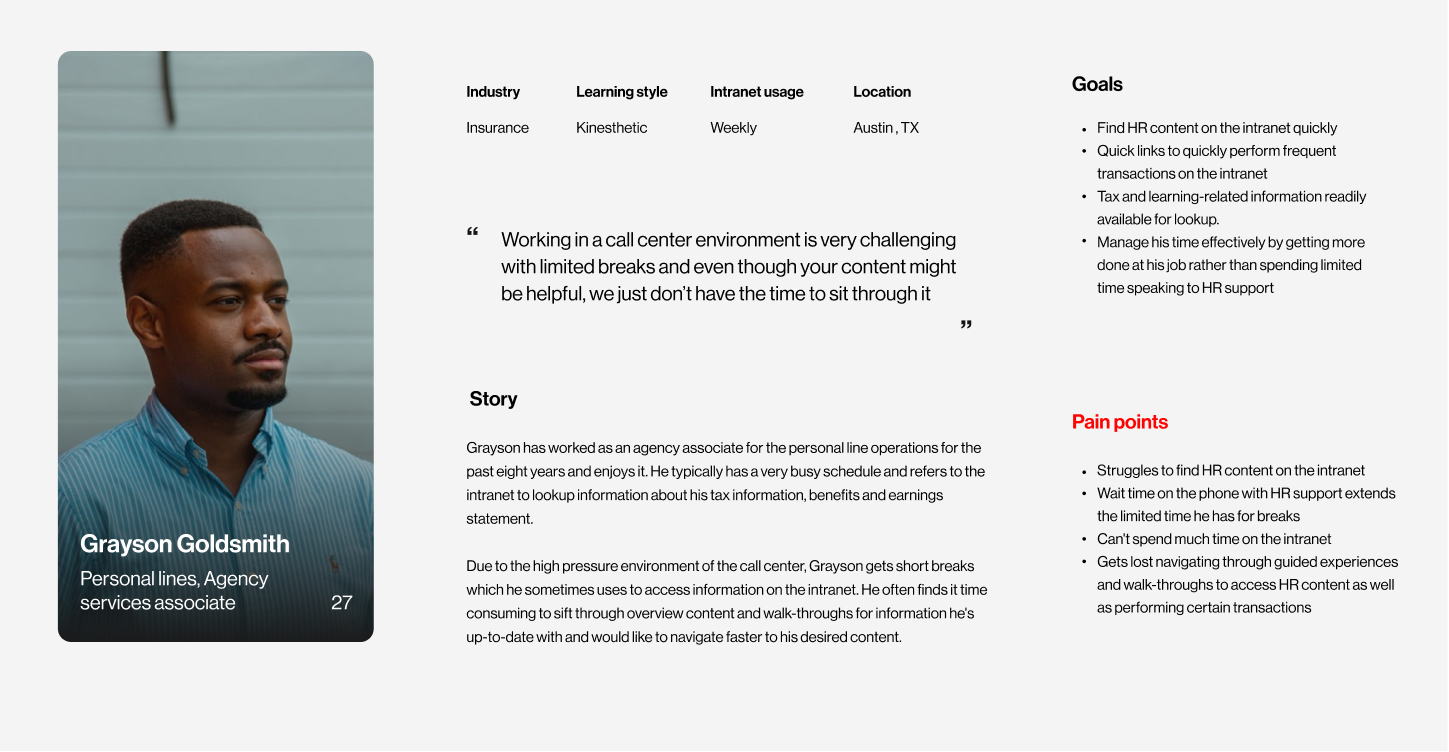 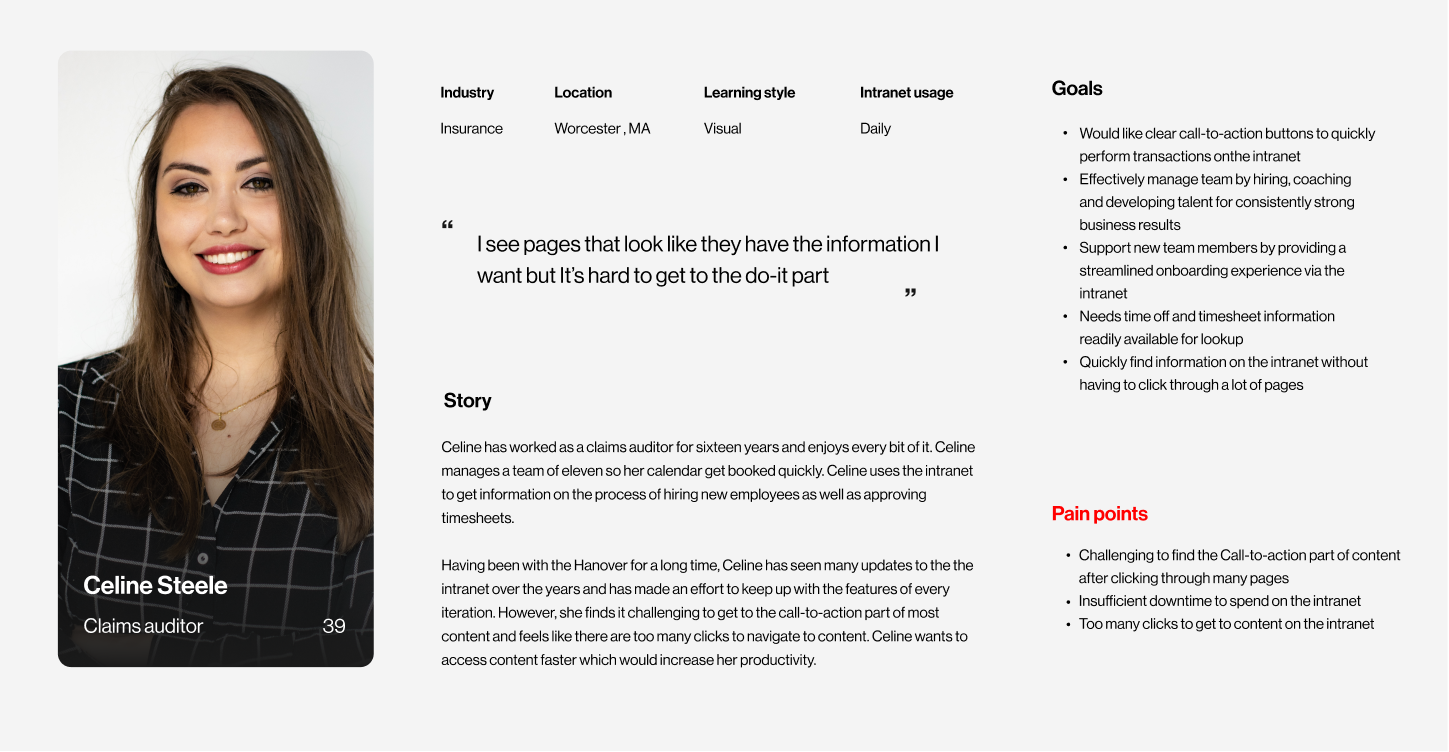 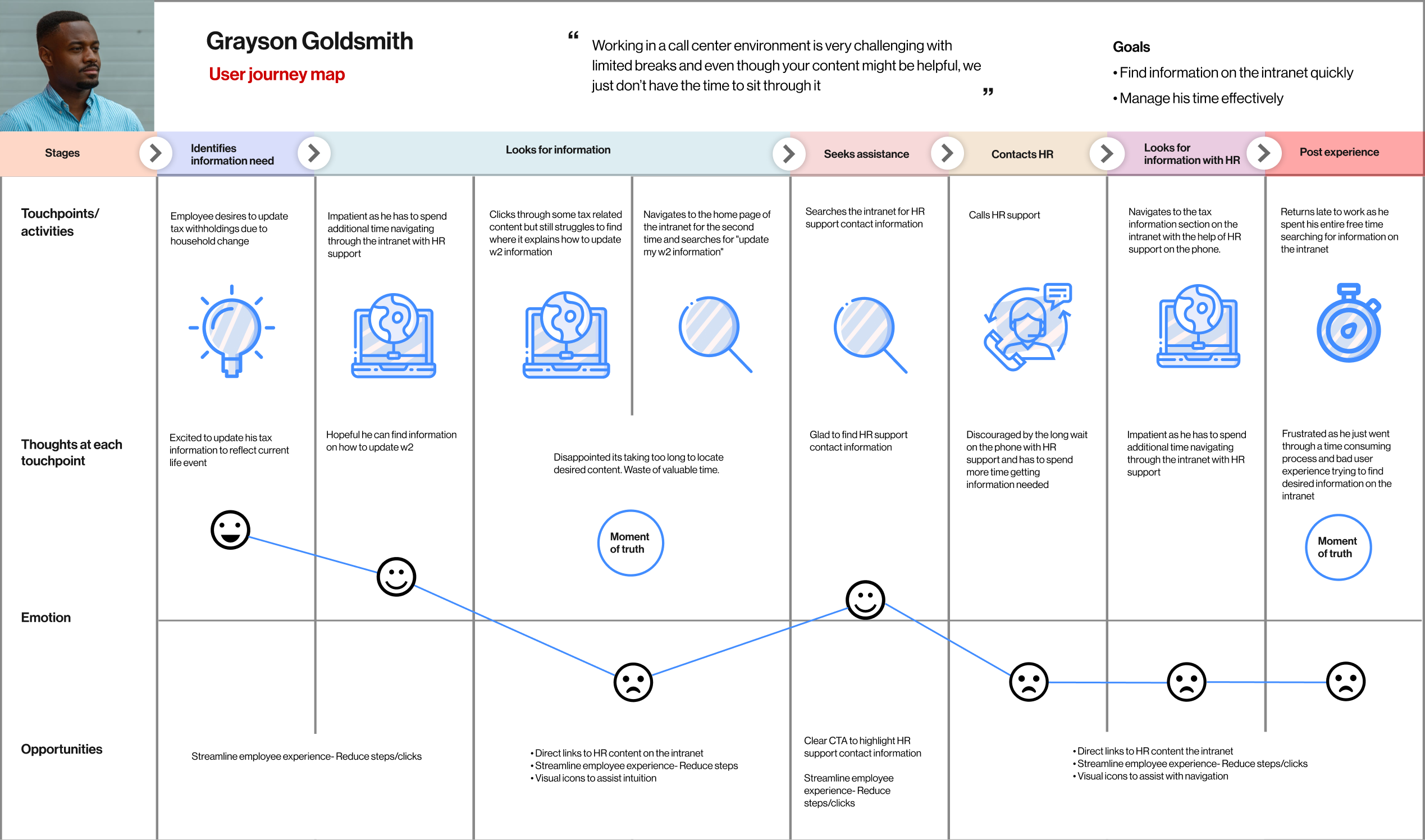 The latest iteration of the company's intranet equipped employees with a lot more HR content. But it was challenging to dissect through the phase-by-phase navigation style to get to the desired content.
As a result, employees spend greater time searching for HR information than attending to their work responsibilities, making them less productive.

Hannah is the chatbot solution designed to revolutionize access to content on the Intranet. Chatbots are expanding rapidly and according to IBM:

The purpose of the chatbot at each stage is to help the user achieve their goal by reading keyword input from the user and serving up direct links to HR content on the intranet. By doing that, employees would spend less time looking for content or calling HR support and can spend more time carrying out their work responsibilities.

Designing a great conversational experience starts with thinking less about what we wanted the chatbot to say and more about what the user wants to do. In our case,  I focused on the employee’s need to quickly access HR information from the intranet.

At this point I was  stuck between designing a choice-based or open-ended conversational flow. Initial web research showed that choice-based flows made it easier to control conversations and guide the user to the desired content but testing this option with users, I discovered a lot of the employees felt a bit overwhelmed with the amount of choices presented which quickly led to another pain point.

A good number of the employees wanted the freedom to communicate their intent to the chatbot but the choice-based flow presented an interaction constraint. 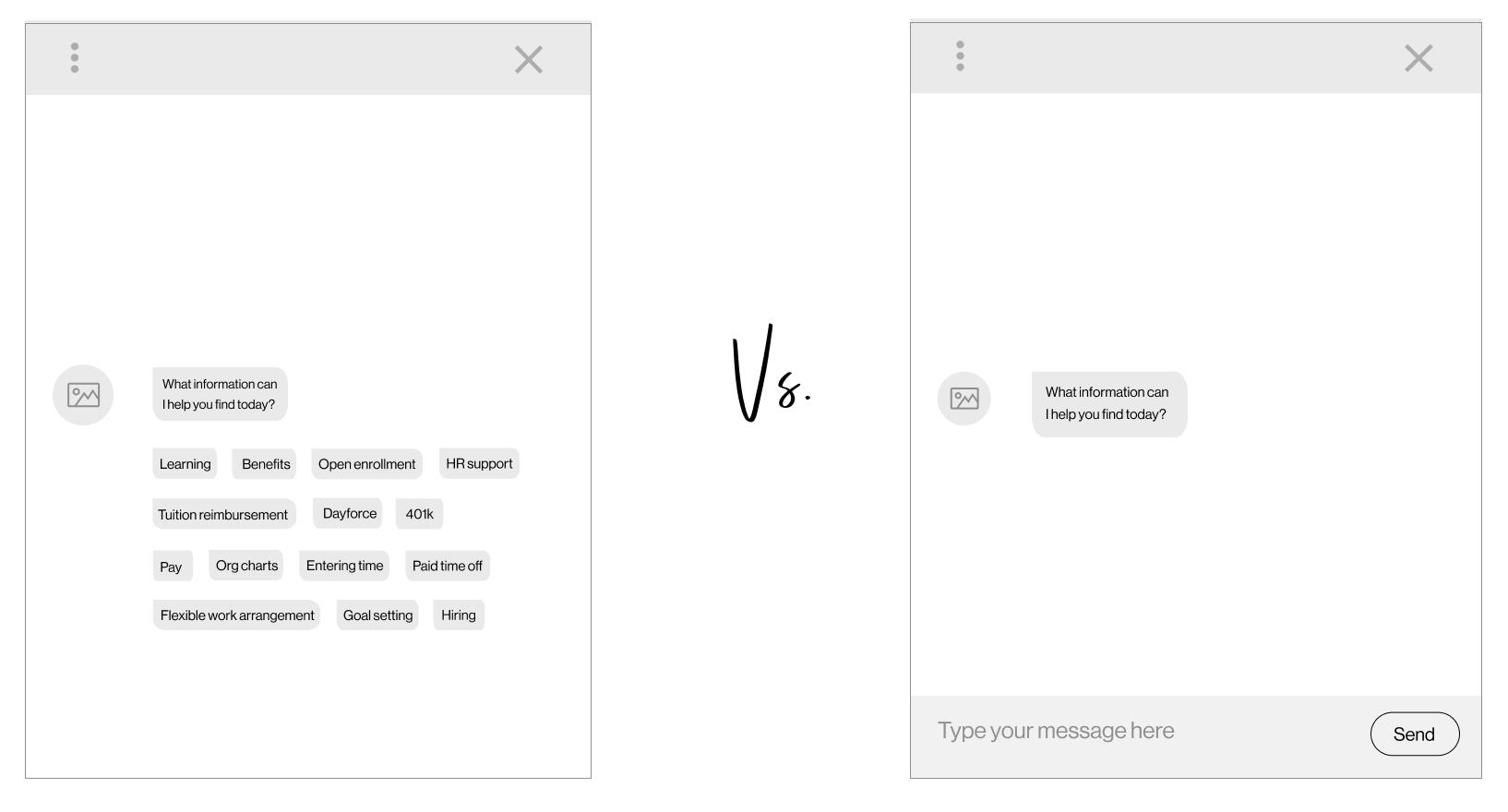 On the other hand, by engaging the user in open-ended conversational interaction patterns, we were able to encourage the user to communicate naturally as well as collect information that provided a better understanding of the user’s active intent, needs and desires.

By designing an open-ended chatbot, we were able to deliver personalized content with a greater potential to satisfy the employee’s needs. 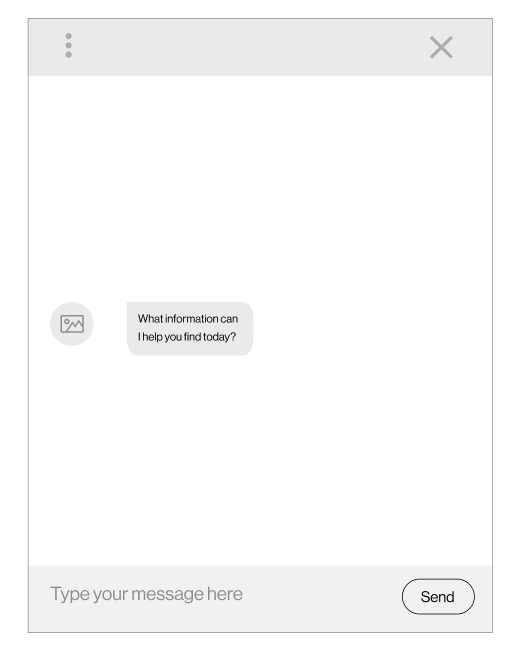 I made a conscious effort to simplify the open-ended conversational flow as much as possible and after some iterations, I arrived at a simple flow. 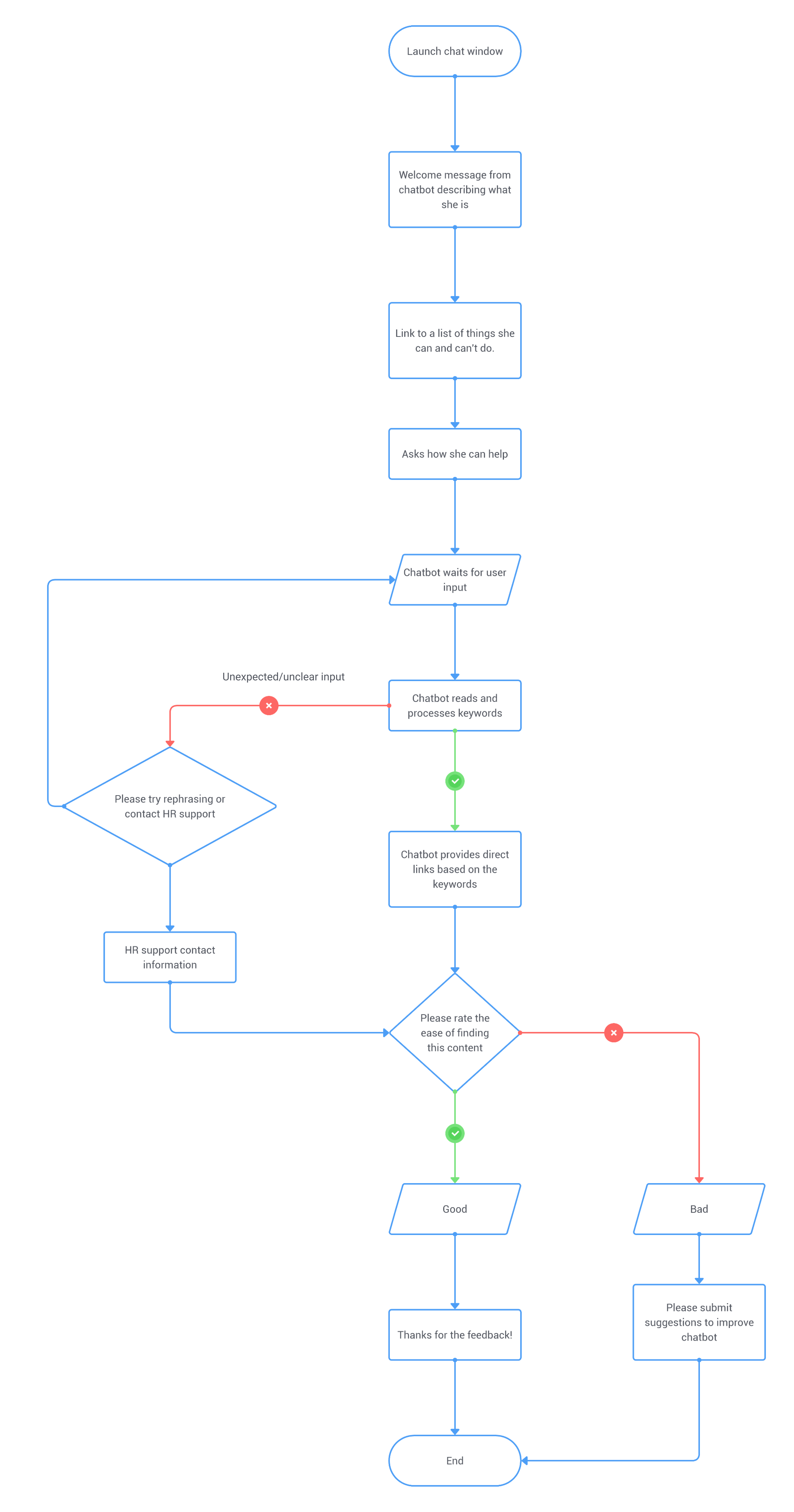 Conversational interfaces exist for better interactions between humans and computers. So it was crucial to design a chatbot that was relatable, relevant and capable of being understood by the employees. 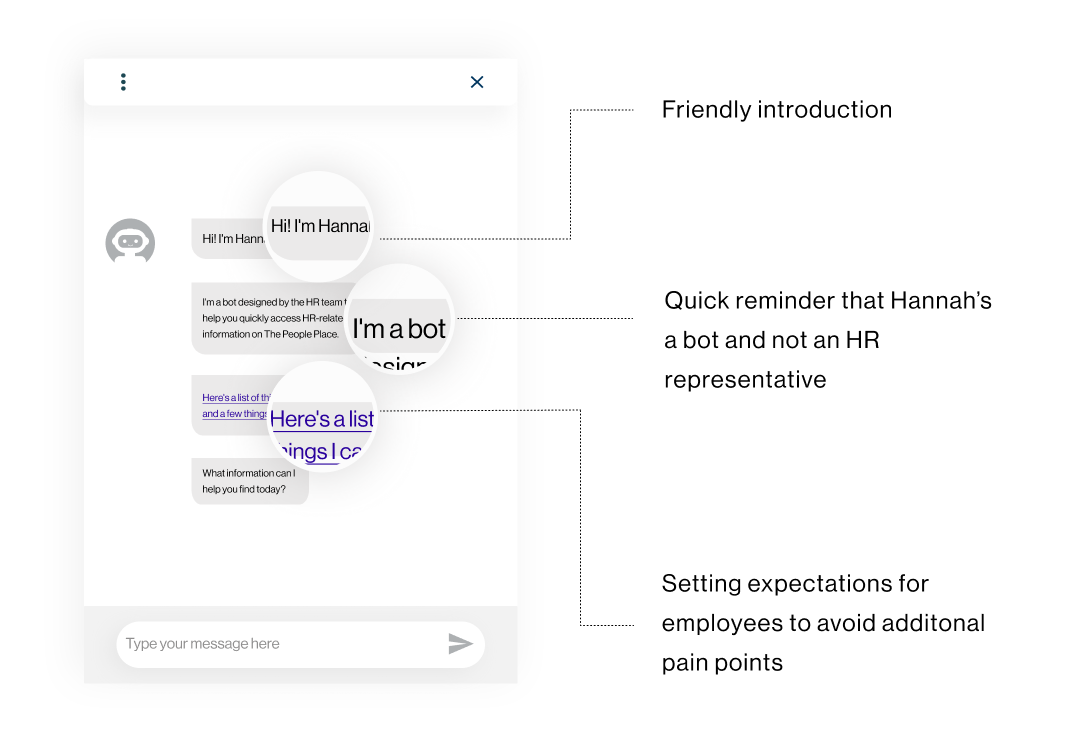 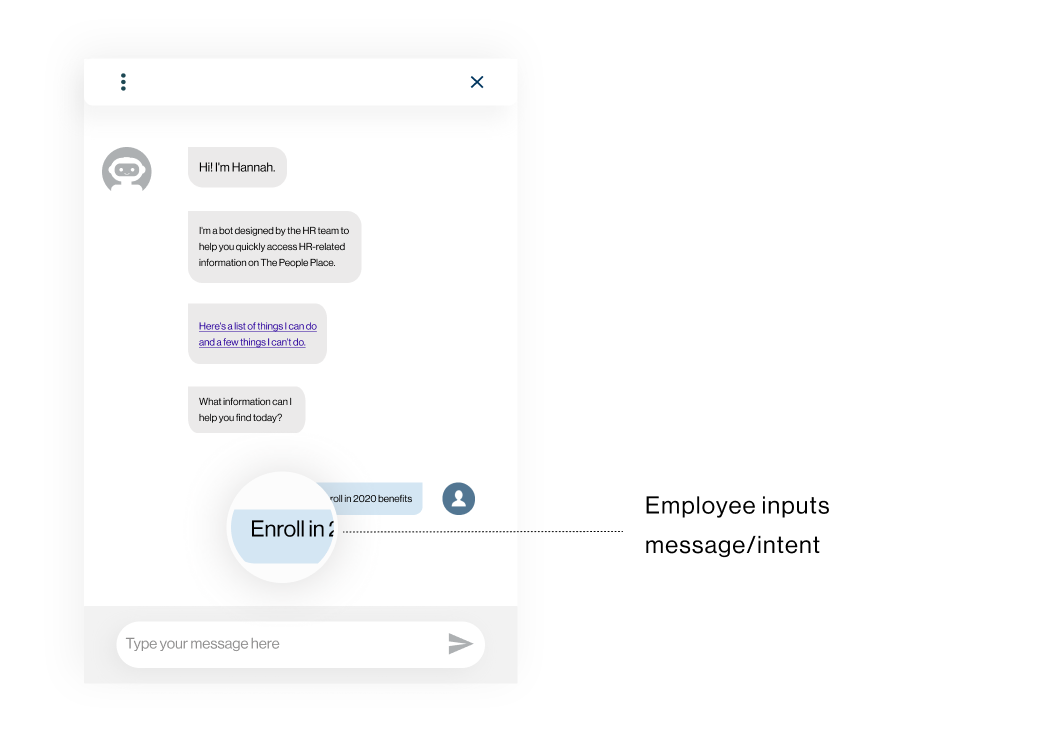 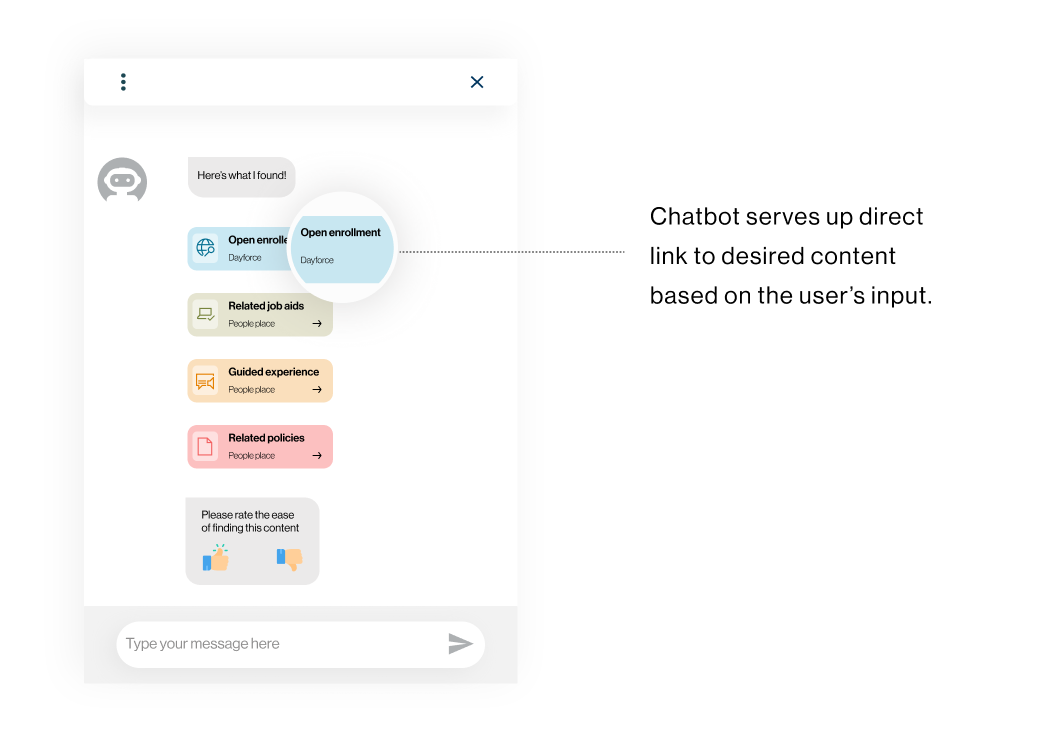 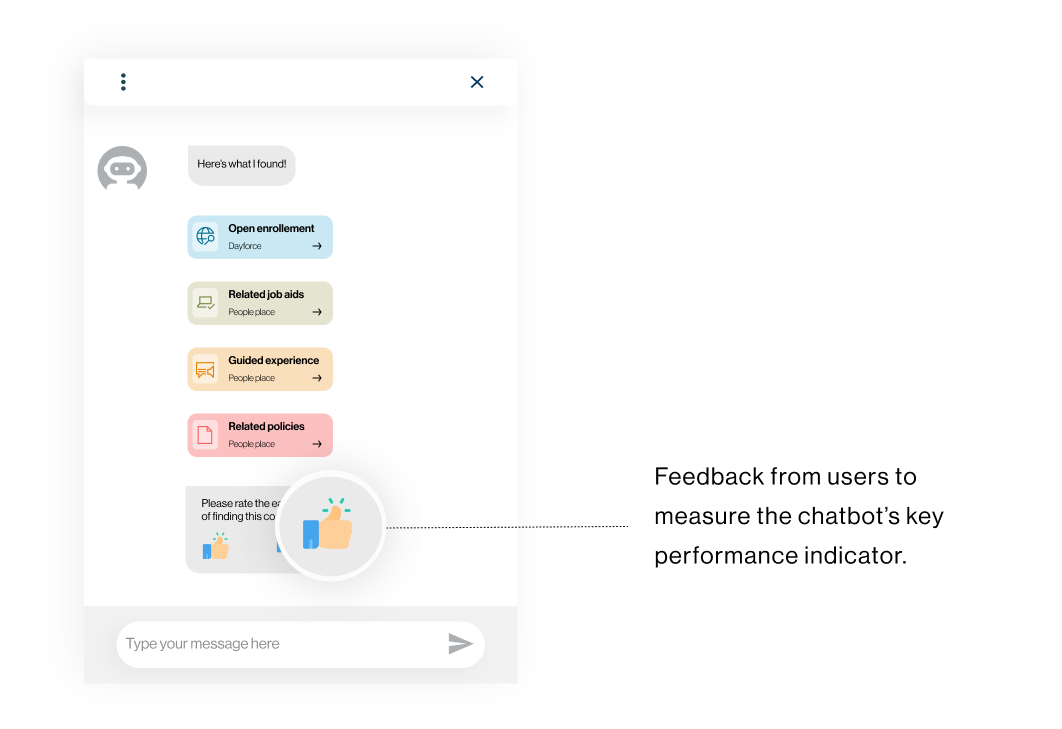 During one of our early user test sessions, a manager asked “Can the bot detect if its interacting with an employee or manager?” We realized the chatbot was unable to do that but the question presented a new challenge to think of ways to design an inclusive chatbot that serves the employee and manager population at the same time.
‍
A few more iterations later, I decided to combine the chatbot’s response to employee and manager content. This presented users with the option to either view manager or employee related content. 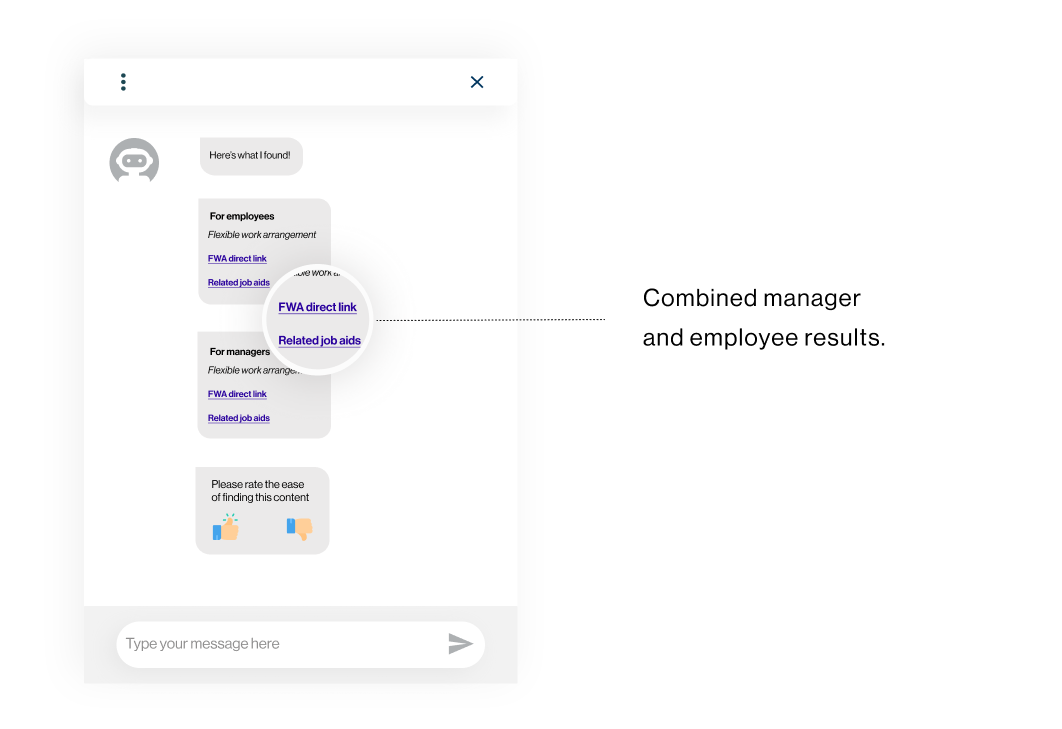 Solving for an unexpected discovery

Follow-up tests showed some employees wanted the chatbot to recall previous interactions. Since this was a roadmap feature yet to be released, the group came up with a solution to provide the option of frequently used links on the intranet as a way to provide faster access to HR content. 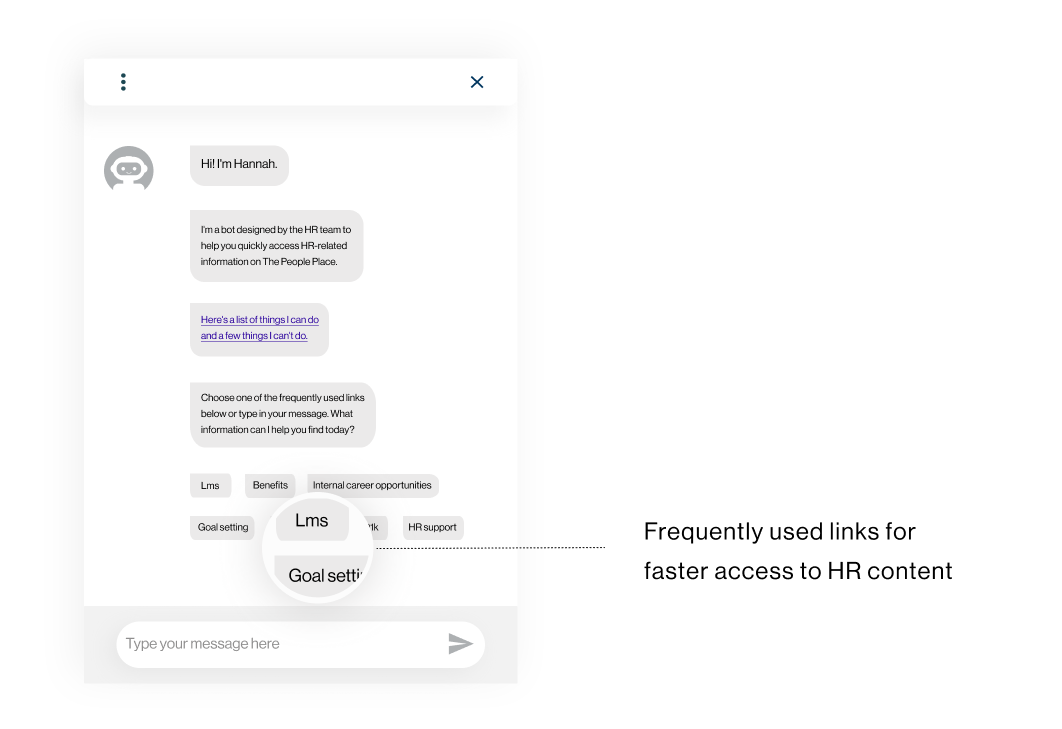 After launch we saw a 45% increase in employee engagement. We also noted a 23% decrease in calls and 18% decrease in email inquiries to HR support. Post-launch tests with employees revealed an increase in efficiency as a result of spending less time searching for HR content on the intranet.

One mistake I made designing the company’s intranet was leaving out a site tour. I assumed the website would be intuitive enough for employees to immediately understand how to navigate through the site. Learning from this mistake, I made a conscious effort to design a chatbot that clearly explains how it operates and how users can engage with it.

This was one of those design projects that I had the opportunity to talk to A LOT of users. Naturally, I wasn't sure what to expect but I actually (thoroughly) enjoyed the process and had several 💡 moments from engaging with employees.
‍
I’ll also note that a lot of the solutions developed initially came from ideas I got from speaking with several employees.
‍
If I would have done anything differently, it would be exploring other avenues to communicate with the chatbot like voice activation or an image-to-text option. Then again these could be dream list features for future iterations of Hannah. 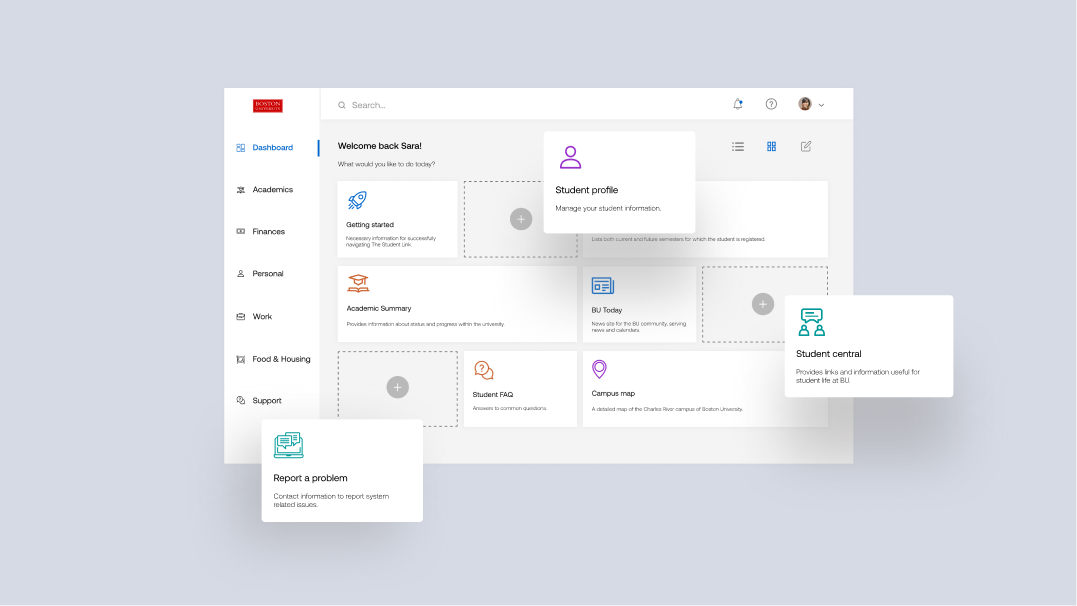